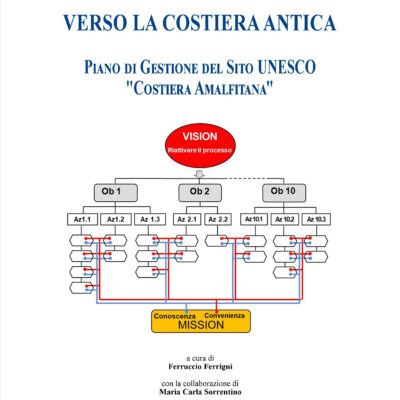 On request of Ministero per i Beni e le Attività Culturali also Costiera Amalfitana Unesco site has been provided with a Management Plan which corresponds to guide lines drew up by Ministero itself. The Plan has been seen as a programmatic instrument shared by local population and by stakeholders located on the territory and not as a further conditioning to area development. Rather, it is a planning tool that aims both to protect the records of past transformations and, above all, to reactivate the virtuous process that has allowed the territory to adapt to the evolving needs of the community, without compromising its stability and functionality.

The UNESCO guidelines suggest that Management Plans should be divided into five Sector Plans: Knowledge; Protection and Conservation; Enhancement of Cultural, Environmental and Socio-economic Heritage; Promotion, Training and Communication; and Monitoring.
It is a deterministic approach; proposing a sequence of activities, from knowing the values to be protected to monitoring the results of the actions implemented. Furthermore, the articulation of the PDG into the 5 Sector Plans suggested by UNESCO assumes the existence of an institution with the competence and power to move from cognitive analyses to actions to be implemented to conserve, protect, valorise etc. An institution that is lacking on the Amalfi Coast. In the MiBACT document “Project for the definition of a model for the realisation of Management Plans for UNESCO sites”, produced by Ernst & Young, knowledge, conservation and valorisation are tools of/for a sustainable development of the community-territory system. A distinctly different conceptual model this, more ‘systemic’. The characteristics of the community-territory system of the Amalfi Coast (criticalities to be corrected, actors called upon to implement the various actions, administrative structure, culture of the local communities involved) suggested producing the Amalfi Coast Local Plan with a mixed structure.
In fact, the PDG is divided into Strategic Objectives, Actions (the policies) and Interventions (the Action). For each of the latter, a sheet was produced identifying the specific objectives, the knowledge, conservation and valorisation activities necessary to achieve them, the foreseeable duration and the success indicators necessary for monitoring. In order to take into account the forces in the field, the sheet is then supplemented by both the list of actors and institutions involved and the forecast of the impact that the intervention will have on the system: not only on the landscape and usability by residents and tourists, but also on the consensus/disapproval of the various stakeholders involved. The propensity of each stakeholder to implement the interventions envisaged in the PoG should be treated as input data of the system, to be used in constructing the project. From this approach derives the PdG of the Amalfi Coast through 10 strategic objectives, to be achieved through various actions, each including one or more interventions. “Reactivating the historical process of compatible adaptation of the territory to the evolving needs of the community”is the vision on which it was built Verso la Costiera antica” the slogan that sums it up.